A Group Photograph by Andrew Tatham

First World War group photos have always fascinated me and over the years I’ve featured quite a number on this site. Sometimes a reader helps to identify an individual whose story can then be told, all in all a wonderful opportunity to remember the men and women who stare back at us from these century old photographs.

Andrew Tatham has taken this fascination to an entirely new level with his excellent book, A Group Photograph: Before, Now & In Between. The book focuses on the lives of 46 officers from the 8th Battalion Royal Berkshire Regiment who posed for a photograph on Salisbury Plain in May 1915, one of whom was his great-grandfather Colonel William Walton. The image, captured in a split-second over a century ago, intrigued Andrew so much that he spent over twenty years methodically researching the lives of these 46 men.

Andrew has not only identified each individual but he has also researched and documented their ancestors and descendants, effectively capturing the story of each family a century before and after the photograph was taken. In the course of two decades he collected enough photographs and stories not only for his book but also for an Exhibition at the Cloth Hall in Ypres which ran from September 2015 to January 2016.

A Group Photograph: Before, Now & In Between by Andrew Tatham

The book provides background information on the photograph, the Regiment and his research however most of its 200 pages are devoted to the 46 officers of the 8th Battalion Royal Berkshire Regiment. One of the challenges Andrew faced was how to present the vast amount of information he collected. In the end he used a variety of clever techniques to summarize their background, service and the impact the war had on their families. One of my favourites is the Photomontage, a timeline constructed from family photos spanning from childhood to the end of their lives. Andrew also created a Stained Glass Portrait of each officer, which he describes as a means to “add colour and depth and to make something that spoke of their uniqueness as a human being and of their spirit“.

I’ve always been interested in how the First World War affects our lives today. The death of so many resulted in some family trees dying out while others flourished however all were impacted in some way. Andrew describes it eloquently when he states:

“In amongst this positive picture of regeneration it’s important to remember that all of these new lives are holders for the past – even though the pain and loss were not talked about, it affected how people behaved, and that behaviour is passed down through the generations, often in ways we do not understand.”

Visualizing the impact the war had on 46 family trees was challenging. Andrew created a new tool, a unique set of Tree Drawings that family historians should find intriguing. I think they do an excellent job of illustrating the big picture while his annotations provide detail. The Tree Drawings originally appeared in the Exhibition as a series of 1-metre high panels spanning 34 metres! The book includes a poster of the Tree Drawings but to examine the trees in detail you can download zoomable PDF documents from Andrew’s website. The drawings are quite beautiful, in the foreword of the book Piet Chielens from the In Flanders Fields museum described them wonderfully when he said:

“…with the lives of ancestors and descendants now elegantly dancing on the tide like branches of a lush mangrove forest.” 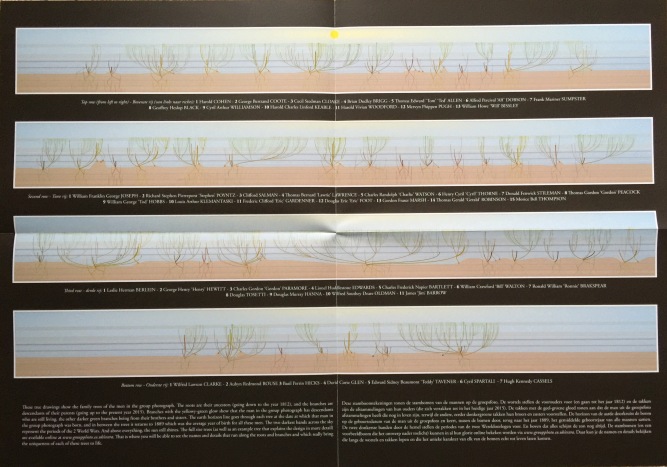 Countless men and women posed in thousands of groups photographs during the First World War but no group has been so thoughtfully remembered as the 46 men who stood together on Salisbury Plain in May 1915.

Whether your interest is in the First World War or Family History I highly recommend “A Group Photograph: Before, Now & In Between“. The book can be purchased from the author via his website.