This small photo (view larger version here), with 17 signatures on the back, was owned by Driver John Fleming who is seated with his arms folded in the lower right corner of the photograph.

Fleming was born in Scotland but emigrated to Saskatchewan in 1908. He was a mechanic and a keen car enthusiast before he joined the Canadian Army Service Corps in December 1915. “Jack” was attached to the 1st Canadian Divisional Supply Column until June 29, 1917 when he transferred to the 1st Canadian Sanitary Section. He would remain with this unit for the duration of the war. The Long, Long Trail provides an excellent overview of the composition of a Field Ambulance unit, including the Sanitary Section. I have quite a bit of information to share about John Fleming but that will have to wait for another time.

There is one other name I can put to a face and that is of the Officer Commanding seated in the middle, Captain Alva Burton Chapman, a physician from Ontario who spent most of his life practicing medicine in Manitoba. He joined the CEF in May 1915 and was initially stationed at the No. 1 Canadian General Hospital in Etaples before joining the 3rd Canadian Field Ambulance later that year. Captain Chapman was awarded a Military Cross on May 26, 1917 “For conspicuous gallantry and devotion to duty. One of our planes being shot down he went to the assistance. On his way he was wounded in the head. He continued on his way to the machine which was being heavily shelled, attended to one of the occupants, and had him carried away” (London Gazette Issue 30204). According to the war diary Chapman assumed command of the 1st Canadian Sanitary Section on Jan. 18, 1918 after 25 months of service with the 3rd Canadian Field Ambulance. The Manitoba Historical Society website has a page dedicated to Alva Burton Chapman.

Having reviewed the 1st Canadian Sanitary Section war diary it became immediately clear that Chapman was on the move almost every day inspecting billets, camps and other facilities. The diary also reveals that he had a Ford Motor car at his disposal and I feel fairly confident in assuming that John Fleming was his driver. Unlike Fleming the Ford car featured regularly in the diary and no less than 4 times in May: 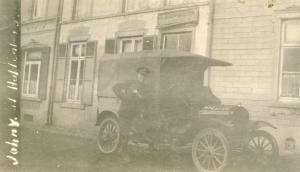 Could the truck in this photo, labelled “Johny in Huldenburg”on the left-hand edge, be the infamous Ford car? The diary states that Chapman spent January and February 1919 in Huldenburg, 25km southeast of Brussels. Although it’s hard to say for sure the vehicle in the photo could be a 1918 Ford Model T Stakebed truck.

There are 15 other signatures that I would like to match to faces in this photograph. I’ve provided some initial research but if you have any other information please contact me or add a comment.