Who Goes There? The 7th Battalion Royal Scots

UPDATE: please see the comments section for feedback regarding the names of soldiers shown in these photos.

A year ago I picked up three wonderful real photo postcards of men from the Musselburgh Company of the 7th Battalion, Royal Scots. The quality of the images were superb and the soldier’s hand-written notes on the backs of two of the postcards intrigued me, partly I confess because my great-great-great grandmother was born in Musselburgh. 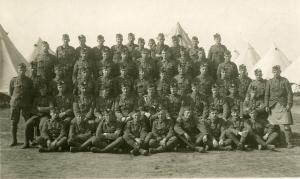 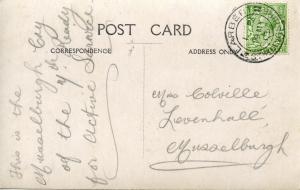 Back of Postcard #1: hand-written notes to a sister

When I began my research just two days ago I was fortunate to find this page on the Scottish War Memorials Project forum which not only provided details on Pte Arthur Balfour Colville but also included a photo of his gravestone. The gravestone also revealed that Arthur’s brother, Archibald Henderson Colville (Service Number 41), died at the Second Battle of Ypres while serving with the Canadian 8th Battalion. I subsequently found a third brother, James Colville (Service Number 39), who also served with the 8th Battalion’s ‘A’ Company and who appears to have survived the war. 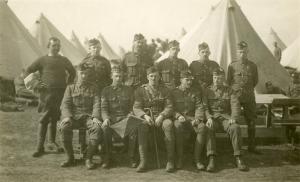 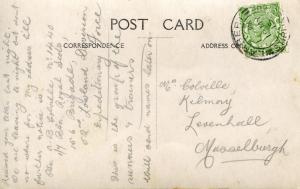 Back of Postcard #2: handwritten note to his mother

The most surprising revelation of all was that Arthur died in the Gretna Rail Disaster on May 22, 1915. Although I knew of this horrific crash I did not make the connection when I purchased these postcards. I was therefore a bit taken aback when I looked at the postmark on two of the cards and realized they were mailed on May 19th and from Larbert where the ill-fated train began its journey. One card, send to a sister, was brief and read “This is the Musselburgh Coy of the 7th . Ready for Active Service”, however the note to his mother was a poignant one:

Postcard #3 (no notes on back)

“Received your letter last night. We are leaving tonight but don’t no (sic) where for. My address till further notice is Pte A.B. Colville No: 1440 1/7 Btn Royal Scots, 156 Brigade, 52nd Lowland Division, Expeditionary Force. This is the group of the runners & trainers. Will send names later on.”

Had Arthur and the 7th Battalion Royal Scots departed on the evening of the 19th then they may have made it to Liverpool and the ship that was to take them to Gallipoli.  However fate intervened and instead two trains departed Larbert in the early hours of May 22nd. The first train arrived safely however the train carrying half the Battalion, including Arthur Colville, did not. This article from The Guardian, published in 2001, provides a first-hand account of the tragedy.

I think it would be a fine accomplishment if we could follow through on Arthur Colville’s promise to “send names later on”, even if it is 98 years on. With this in mind I would ask that if you can identify any of the soldiers in these photos that you leave a comment below or contact me directly. I will update this post with new information as and when it becomes available.

Identifying these soldiers will be easier on account of John Duncan who just added a Gretna Disaster photo gallery to his Newbattle at War website. Although I didn’t spot Pte A.B. Colville in the gallery I know that a photo was published on page 5 of the May 28, 1915 issue of the Musselburgh News. An index to First World War soldiers pictured in the Musselburgh News can be accessed via this page on the East Lothian Council website.