The Western Front was no stranger to the macabre but surely the fate of Lance-Corporal Josiah Cleator was particularly cruel. Creature comforts were in short-supply in the trenches and soldiers often took refuge in their dugouts. When Josiah lit his stove, possibly to brew a hot cup of tea, he had no knowledge of the dud shell that may have laid beneath.

Josiah Cleator was born in Whitehaven, England in 1886 and emigrated to British Columbia in 1909. In 1912 he married Emma Elizabeth Holmes in Victoria. Josiah, a plumber by trade, enlisted at age 30 and had plenty of military experience. He spent four years in England with the Border Regiment and two years in the 88th Victoria Fusiliers in British Columbia. He joined the 50th Gordon Highlanders of Canada in mid-November 1915 and was with that unit when he enlisted with the 143rd Battalion (BC Bantams) on February 17, 1916.

Cleator was an Acting Sergeant in the 143rd but chose to revert to the ranks when he was transferred to the 5th Army Troop Coy, Canadian Engineers shortly after he arrived in England in February 1917. He was promoted to Lance-Corporal just days before embarking for France in late June. In mid-October the 5th Army Troop Coy relocated to Brandhoek near Ypres where they focused on Light Railway construction and repair.

It’s unknown which Section Josiah was working in on November 9th, 1917. Two sections were working on the Light Railway at Spree Farm, near St. Julian while others were employed near Vlamertinghe. The War Diary entry notes that it was a showery day and so perhaps it was the inclement weather rather than shelling that prompted Josiah to take shelter inside his dugout. What happened next was the topic of much speculation.

Within two weeks of his accident the British Colonist published two brief articles, one containing a photograph, but at that time little was known other than he died of his wounds. An article from February 3, 1918 provided much more information including a report that another individual had died in the explosion. However Josiah’s Service File includes a Court of Inquiry document that makes no mention of a second fatality. It does however include the chilling witness statements provided by the soldiers occupying the dugouts adjacent to Josiah.

“Suddenly flames appeared through the partition separating the two dug-outs. Then followed screams. I rushed out and as I did so Lance Corporal Cleator emerged from his dugout enveloped in flames.”

“…I was seated in my dug-out adjoining that occupied by Lance Corporal Cleator. Of a sudden I perceived flames through the partition separating the two dug-outs; immediately followed by a series of ‘Oh’. I went out to determine the cause of these and there encountered Lance Corporal Cleator in flames.”

Oddly the statements indicate the accident took place on November 6 however all other sources, including the unit War Diary, confirm it occurred on November 9 and that Josiah died of his injuries at the No. 10 Casualty Clearing Station that same day.

The Court of inquiry states that the cause of the fire was “of unknown origin” however Major E.R. Vence, their Commanding Officer, concluded:

Josiah Cleator was laid to rest, along with 9,876 other Commonwealth soldiers, at the Lijssenthoek Military Cemetery in Belgium which I was fortunate to visit earlier this year. 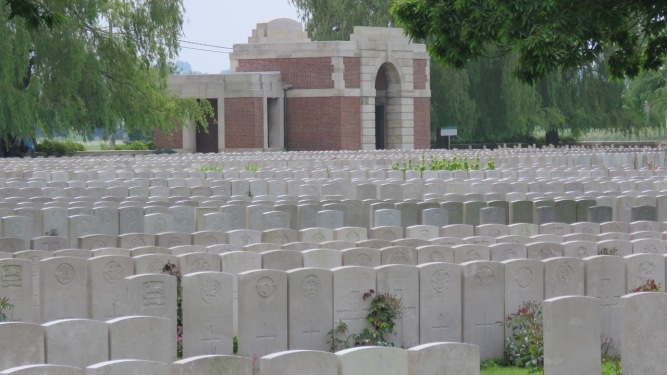 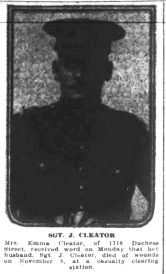