Wrapping up my visit to Ypres

I’m back in London after a memorable six day visit to Ypres. As I’ve mentioned before my main objective was to visit the graves of soldiers who had a connection to my hometown of Victoria, BC. I could have simplified the logistics of getting around by renting a car however I also wanted to get a feel for the lay of the land and there is no better way to do this than by walking or cycling. On Saturday I provided a brief summary of my first three days in Ypres and so what follows is a short account of my final three days. 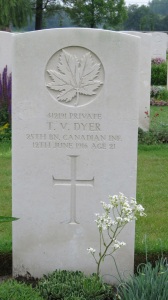 Pte. T.V. Dyer, one of 6 Canadians buried at Railway Dugouts Cemetery who died 100 years ago to the day

On Sunday I headed out on foot in the direction of Zillebeke Lake. A light mist clung to the fields and added to the stillness of what was already a very quiet morning. Once reaching the lake I followed a wide footpath along its length for at least a kilometre before emerging on a short section of road that led to Railway Dugouts Cemetery. There were four soldiers with Victoria connections to visit but I also paused for a moment at the graves of six other Canadians who died exactly 100 hundred years ago to the day. As I did so trains rumbled past on the Poperinghe to Antwerp line but this didn’t distract from the peacefulness of this beautiful cemetery.

One memorable highlight was on the approach to Vlamertinghe. The town’s church spire was clearly visible several kilometres away as were the spires in Ypres to my right and Poperinghe on my left. It was exactly this first-hand knowledge of distance and terrain that I wanted to experience on my walk.

The view of Ypres from Hill 62. Maple Copse Cemetery is in the second wood on the left

On day 5 I needed to cover more ground and so I decided to get back on the bike. My first stop was Maple Copse Cemetery which I visited earlier in the week but I wanted to return today as it was the 100th anniversary of the death of 17-year Raymond Clifford Burton, a former printer with the local newspaper. I then pedalled a short distance across a field to Sanctuary Wood Cemetery and the Hill 62 Canadian memorial commemorating the battle at Mount Sorrel. Considering it was the 100th anniversary of the retaking of Hill 62, and after much loss of life, it was sad to see it so quiet. Apart from five cyclists from Sheffield I was the only other visitor. I hope I wasn’t the only Canadian to visit the memorial on this day.

I continued in a south-westerly direction in search of Cabin Hill Cemetery but without a proper map it wasn’t long before I was hopelessly lost. I was consoled by the knowledge that the locals were equally mystified as to the location of Kaleutestraat. I eventually managed to find the town of Wijtschate which had posted a very helpful map near it’s marketplace that allowed me to get my bearings. Fifteen minutes later I coasted down to the tiny cemetery surrounded by rolling fields and a small herd of grazing Alpacas who, judging by the stares, found this dishevelled Canadian mildly interesting (or perhaps it was amusing). Cabin Hill is the final resting place of 2nd Lieutenant Frank Dunn, a former sports editor for The British Colonist who I have written about in the past. 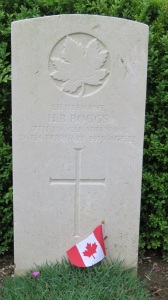 Lt. H.B. Boggs, the first Canadian officer to be KIA in the First World War

My bike trip to Ploegsteert (and back to Ypres) also included stops at La Plus Douvre (Ration Farm) Cemetery, Berks Cemetery Extension and the Ploegsteert Churchyard where I visited Lt. Herbert Beaumont Boggs, a former Victoria High School student and the first Canadian officer to be KIA in the First World War.

My final day in Ypres would end with a train ride to London and so I spent much of the day in the city. I returned to In Flanders Fields Museum just in time to have lunch with author Andrew Tatham. It was a real pleasure meeting Andrew and I look forward to writing more regarding his wonderful book, A Group Photograph. In the meantime I encourage you to visit his website to learn more about this fascinating and unique Art and History Project.

My visit to Ypres will result in many articles in the coming weeks and months including my tour of In Flanders Fields permanent exhibit and their tribute to Canada in Flanders. I’d like to thank the museum, and in particular Annick Vandenbilcke, for her warm welcome and for taking the time to meet with me on not one but several occasions.

The footpath along Zillebeke Lake

Pte. T.V. Dyer, one of 6 Canadians buried at Railway Dugouts Cemetery who died 100 years ago to the day 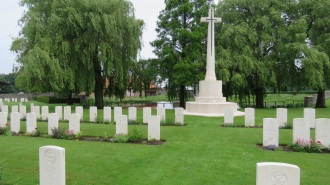 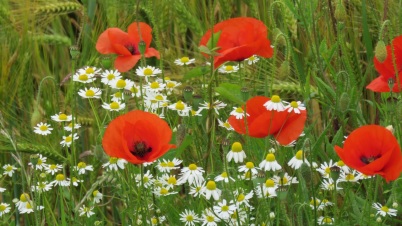 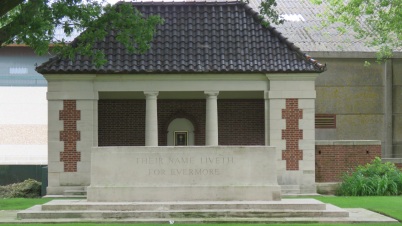 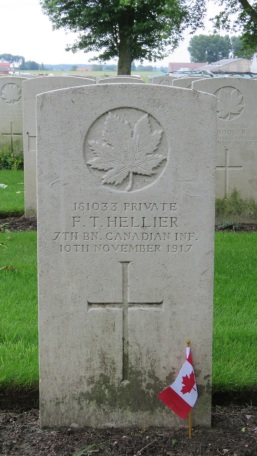 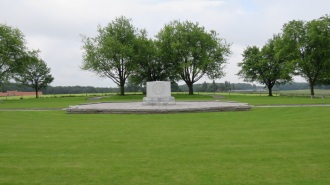 The view of Ypres from Hill 62. Maple Copse Cemetery is in the second wood on the left 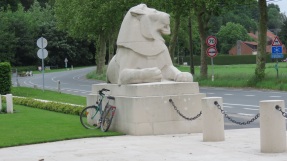 Lt. H.B. Boggs, the first Canadian officer to be KIA in the First World War 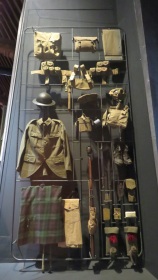