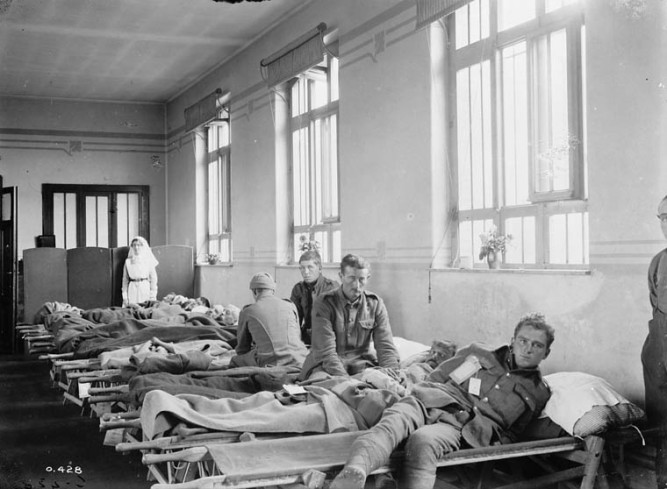 Volunteers from the British Isles Family History Society of Greater Ottawa have created a very helpful database listing 879 Great War soldiers, mostly British and Canadian, who died at No. 1 Canadian Casualty Clearing Station. The No. 1 Casualty Clearing Station database entries were transcribed from a register maintained by chaplains who served with the unit during the First World War. Researchers can search by soldier’s name, serial number or by chaplain. While not every entry includes the name of a chaplain the majority of soldiers were attended to by the following individuals:

To mark the centenary BIFHSGO volunteers have begun compiling short biographies on each soldier. The first 30 bios are already online and it’s clearly evident that a great deal of hard work and long hours have gone in to making these available to us. If you have any information on the soldiers listed in the database please contact BIFHSGO via their website.

Below you will find links to the soldiers whose biographies are already online: 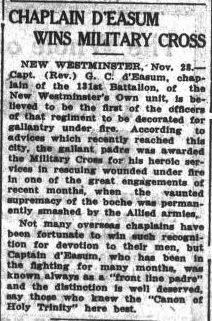 To this list I will add a very brief biography of one of the chaplains who maintained the register. Geoffrey Cyril D’Easum was born in Poona, India in 1870 and enlisted in 1916 with the 131st Battalion in New Westminster, BC. In late October 1917, while attached to the 12th Canadian Infantry Brigade, he was gassed and spent nine weeks in hospital and at convalescent homes in France. On Dec. 31st D’Easum was attached to the No. 1 Canadian C.C.S. where he served until mid-May 1918. In early June he joined the 78th Battalion (Manitoba Regiment) and in September he was injured a second time when he was struck by a brick that fell from a building during an air raid. D’Easum was recognized for his commitment to his men when he was awarded a Military Cross, the citation for which appeared in the Dec. 2, 1918 London Gazette. He died in Saanich BC in 1954.