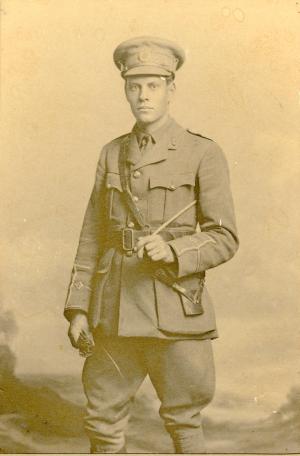 Victoria BC has been home to expatriates from across the Empire since it’s earliest days. Despite knowing this I must admit I was nonetheless surprised to discover that an officer, one of 29 who famously escaped from Holzminden P.O.W. Camp in July 1918, is buried but half a dozen miles from my home.

John Keith Bousfield was born on November 17, 1893 in Hendon, Middlesex to Barrister and former MP William Robert Bousfield and Florence Maria Kelly. John was the second youngest of seven children and attended Uppingham School in Rutland before entering Gonville and Caius College, Cambridge in 1912.

On his 21st birthday OTC cadet Second Lieutenant Bousfield received a commission in the Royal Engineers (source: London Gazette). He arrived in France on August 20, 1915 and in 1916 distinguished himself by undertaking dangerous reconnaissance work at the Somme. This earned John a Military Cross for “conspicuous gallantry in action“, an honour bestowed upon him by the King at Windsor in late 1918.

In early 1917 John was promoted to Lieutenant and attached as an observer to 57 Squadron of the Royal Flying Corps. On April 6, 1917 he was shot down behind enemy lines near Valenciennes and imprisoned at a series of camps including Karlsruhe, Crefeld, Strohen and finally, Holzminden.

The daring escape of 29 officers on the night of July 23, 1918 has been well documented in print, online and in an excellent 2014 documentary entitled “The First Great Escape“. The tunnel, which was over 60 metres in length and took over nine months to excavate, collapsed on the 30th escapee but John was one of the lucky ones and one of only ten officers to make a ‘home run‘ to Britain. An excellent account of his 13-day escape was captured in this 1918 newspaper article.

After the war John returned to Cambridge and in 1920 received a bar to his Military Cross. He later joined the Asiatic Petroleum Company and moved to Hong Kong where he married his wife, Edith Castens in January 1930. Edith was born on the Isle of Wight and was the daughter of William Ernest Castens, a South African born Lieutenant-Colonel in the Royal Artillery. Lt-Col Casten and his Canadian-born wife settled in Victoria in 1931.

John continued working for the Asiatic Petroleum Company during the Second World War but left Hong Kong for a number of locations in Canada and the United States, including Victoria, the home of his in-laws. On October 29, 1945 John Keith Bousfield died at the Royal Jubilee hospital and was buried at the cemetery at Royal Oak. He was only 51.