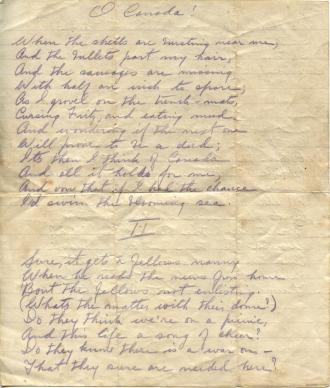 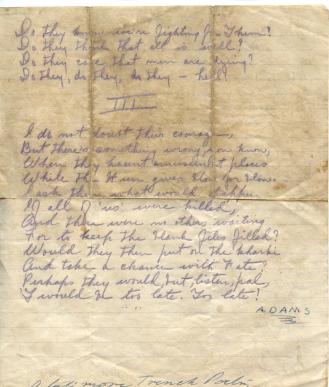 On the weekend I acquired a small and curious collection of First World War ephemera that included a handful of poems written by at least two different soldiers. One of these trench poets signed his work “ADAMS” and I’m featuring it here. There are two hand-written copies of  “O Canada!“, one of which is dated July 3, 1916.

The poem expresses the soldier’s frustration at his countrymen back home who were not joining up in the numbers required to replace the fallen at the front. The government was concerned as well and began easing recruitment restrictions which helped a bit but not enough to prevent the passing of the Military Service Act in 1917.

As far as I can tell this poem has not been published before but if you know otherwise, or can provide any information on its author, please let me know.

When the shells are bursting near me,
And the bullets part my hair,
And the sausages are missing
With half an inch to spare;
As I grovel on the trench-mats,
Cursing Fritz and eating mud,
And wondering if the next one
Will prove to be a dud;
It’s then I think of Canada
And all it holds for me,
And vow that if I had the chance
I’d swim the blooming sea.

I do not doubt their courage,
But there’s something wrong, you know,
When they haunt amusement places
While the hun gives blow for blow.
I ask them what would happen
If all of ‘us’ were killed,
And their were no others waiting
For to keep the blank files filled?
Would they then put on the khaki
And take a chance with fate?
Perhaps they would but, listen, pal,
‘Twould be too late, too late! 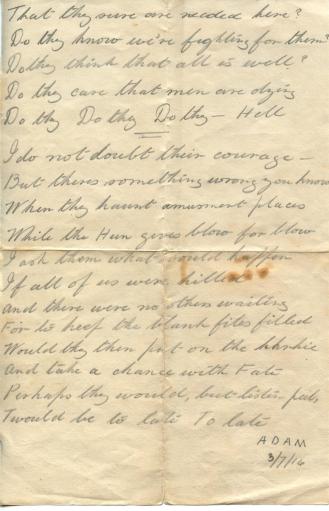 Categories: Poetry, Who Goes There?