Vimy Ridge: “But I Would Not Have Missed It For Anything”

On June 1st 1917 Private Guy Edmund Smith (#153485) wrote a letter from a convalescent camp in Boulogne to his good friend Richard Brooker in Winnipeg. The 24-year old Private reflected on his close encounter with a German “crump” (a large artillery shell) at Vimy, which he referred to simply as “the ridge”.

Bedfordshire-born Smith emigrated to Canada in 1909 and served in the 79th Cameron Highlanders of Canada prior to enlisting in July 1915. He joined one of four drafts raised by the 79th to reinforce the 43rd Battalion (Cameron Highlanders of Canada). The 43rd had only just departed for England but on arrival were required to send men to reinforce the 16th Battalion (Canadian Scottish) who had sustained heavy losses at the Second Battle of Ypres.

The 43rd arrived in France in February 1916 and in September fought in the latter stages of the Battle of the Somme before making their way to Vimy Ridge in mid-October 1916. The battalion rotated in and out of the lines throughout the winter and early spring and on April 8th were relieved from the front lines. They were in reserve when the assault that took place in the early morning hours of April 9th however within days the 43rd relieved the 49th Battalion and took up positions on the ridge.

Guy Smith was a member of a machine gun crew in ‘C’ Company and, according to the battalion’s war diary, ‘C’ Coy was attacked on the evening of April 16th. Smith doesn’t specify dates in his letter but it’s likely he was wounded during the shelling that took place that evening. Six weeks later he writes to his friend:

“Well you see Fritz has not managed to get me yet, though he came close to doing so a little while back, as to kind of upset my apple cart and set my silly old heart ticking all wrong. One of his big Crumps did it. My gun position was to (sic) near the blessed thing fell. With my usual good fortune I escaped with a severe shaking up though I am sorry to say three of our poor fellows were killed, two of my gun crew and one of another who was talking to us at the time. It happened on the Ridge.”

To this he adds dryly:

“The moral of this experience is to dodge them with a bigger margin next time.”

He also tells his friend in Winnipeg that a mutual friend, Rod Ballantyne of the 78th Battalion, was killed on the ridge:

“I suppose you will have heard of this by that Rod Ballantyne was killed on the Ridge, no need to say which ridge is there. Guess you will have seen by the papers what we have been doing. So all I will (say) is that we had a hot time. But I would not have missed it for anything. It was terribly grand. The sight of a life time. That is not to say I am anxious to participate in any more but if necessary I am still willing.”

Guy also mentions his two brothers, Jack and Earnest, both of whom served in the CEF. He writes of his concern for their well being in two other letters which I plan to publish at a later date. Guy’s concerns were well founded as neither Jack or Earnest would survive the war.

As did many other soldiers, Guy’s final thoughts turned to home and he ends his letter on a wistful note:

“How about some golf next Saturday afternoon. I hope it will not be long before I am saying something like that to you. Well old pal guess I must quit, the tea call has gone and I am hungry”

Guy Smith survived the First World War and returned to Winnipeg where he married and raised a family. He died in 1975 but one hopes not before enjoying a round or two of golf with ‘Dear Old Dick’. 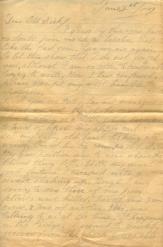 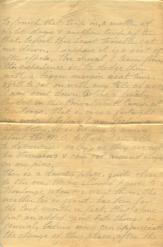 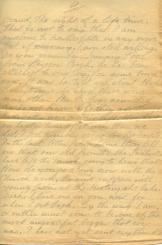 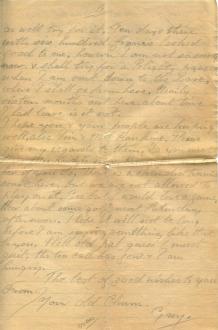