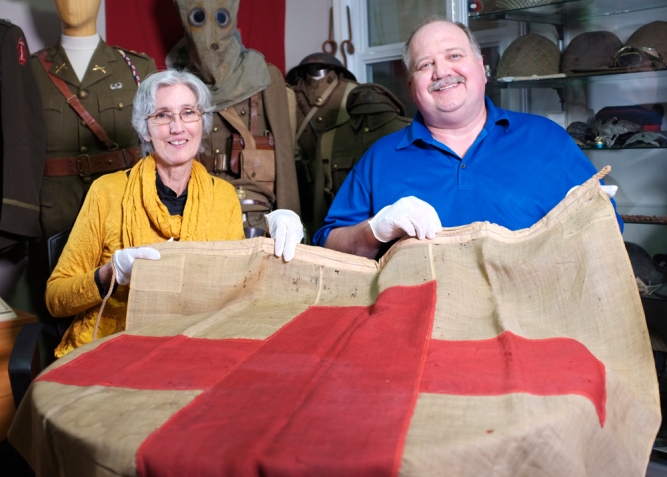 In December 2013 I wrote about an Australian First World War Red Cross flag that I was surprised to find for sale in a shop in my hometown of Victoria, British Columbia. I ended the article by saying that I could put my readers in touch with the owners but “My only interest in doing so is to ensure that the flag returns to Australia and that it is accessible for all to see“. I am very pleased to report that after 15 months, and a great deal of effort by a small team of individuals in Canada and Australia, the flag has returned home to Australia.

I wrote a follow-up article in January 2014 that put to rest any doubts I may have had about the flag’s authenticity. I was hoping the article would attract the attention of researchers and archivists in Australia and although there were a few enquiries they led nowhere. In June I learned that the flag had been sold to a Canadian collector for $25,000. My initial reaction was one of disappointment as I feared it might be squirrelled away never to see the light of day. My concerns were short-lived as within 24 hours I exchanged emails with it’s new owner, Doug Buhler in Edmonton. Doug was a firm believer that the flag should go home and so we agreed to keep each other up-to-date on any developments.

I continued to receive the occasional enquiry from Australia but it wasn’t until December, almost a year to the day I wrote the first article, that I was contacted by Wendy Lugg of the Royal Western Australia Historical Society. Many emails followed but it didn’t take long to realize that if the flag was to be repatriated Wendy would play a key role in championing its return. Just before Christmas I introduced Doug to Wendy and a representative from Museums Australia and crossed my fingers.

There were many twists and turns in the months that followed but Doug and Wendy persevered and a deal was struck to ensure the flag would be on display in Australia for the centennial commemorations in April. Last weekend Wendy flew from Perth in Western Australia to Edmonton to collect the flag and fly it home the following day. The story was featured in the Edmonton Journal, The Western Australian and on CBC Radio. The flag is on loan to the Royal Western Australia Historical Society and will be on display as part of its Beyond the Battlefields exhibit opening on April 20, 2015. A crowdfunding campaign has been launched in a bid to ensure the flag remains in Australia.