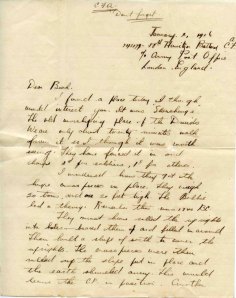 A letter written to his older sister Margaret (“Beah”) from Lark Hill Camp on January 2, 1917. Note: he dated his letter “1916” but this was a mistake as he was in the 115th Battalion (infantry) before transferring to the Artillery in November 1916.

I found a place today I thought would interest you. It was “Stonehenge”. The old worshiping place of the Druids. We are only about twenty minutes walk from it so I thought it was worth seeing. They have fenced it in and charge 3d for soldiers, 1s for others.

I wondered how they got the huge cross pieces in place. They weigh 20 tons and are 20 feet high. The Bobbie had a theory. Remember this was 1700 B.C.

They must have rolled the uprights into holes and braced them up and filled in around Then built a slope of earth to cover the uprights. The cross pieces were then rolled up the slope put in place and the earth shoveled away. This would leave the CP in position. Another little point. There is no stone of this description within 50 miles. They must have hauled (how?) these immense pillars all that distance.

The Druids still come each year to worship the Sun. On the 21st day of June the sun casts the shadow (#1 postcard) of the big rock on the altar.

Some years ago air ship sheds were built in the crest of the hill directly in line with the big rock. The Druids complained and the sheds were moved over to the right. (#1 PCard).

This may not interest you but it is different when you see the real thing.

I have a letter in the other camp that I will mail to you Sunday. Away for a week. The box came. Everything was fine.

View his original letters and family tree info on Flickr