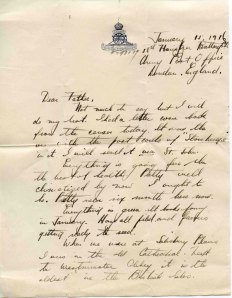 A letter written to his father on Canadian Field Artillery letterhead on January 15, 1917. The “Dot” referred to at the end of his letter is his younger sister Dorothy.

Note: he dated his letter “1916” but this was a mistake as he was in the 115th Battalion (infantry) before transferring to the Artillery in November 1916.
Transcription:

Not much to say but I will do my best. I had a letter come back from the censor today. It was the one with the post cards of “Stonehenge” in it. I will send it via St. John.

Everything is going fine – the best of health. Pretty well climatized by now. I ought to be. Pretty near six month here now.

Everything is green. It looks funny in January. Hay all filed, and farmers getting ready to seed.

When we were at Salisbury Plains I was in the old Cathedral. Next to Westminster Abbey it is the oldest in the British Isles.

I sent to St. John for a pair of Palmers trench boots. They are a fine rig. About the only protection against the water and mud. Rubbers are not much good, the mud is too deep. I hope they come before we leave. They ought to.

My riding is improving every day. I will have a picture taken this pay day and show you what I look like.

I got Dot’s letter and two from Beah. She talks as if she was pretty well satisfied.

I will write again soon.

Love to Mother and all

View his original letters and family tree info on Flickr