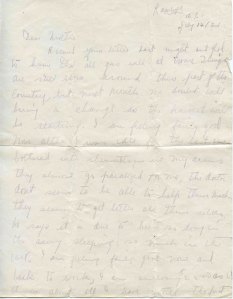 A letter written to his mother on July 14, 1921 while working in Kamloops.

Received your letter last night and glad to know that all goes well at home. Things are still slow around this part of the Country but next month no doubt will bring a change as the harvest will be starting. I am feeling fairly good now altho I was was idle for the last 3 weeks bothered with rheumatism in my arms. They almost go paralyzed on me, the doctor don’t seem to be able to help them much they seem to get better all themselves, he says it is due to being so long in the army sleeping so much in the wet. I am feeling fairly good now and back to work. I am enclosing $20.00 as it is about all I have until the first of the month and I think I can send send you enough then to make up my insurance. Where is Mary intend going to, or has she made up her mind yet. I may get chance to see her, — if they don’t come across with more money here. I am going to Alberta next month to harvest. I saw by the C—– where they have started their big athletic —- in the town. What came over them. How is Bert’s Amy coming along. I was sorry to hear that —– Stewart was laid up again. How is John himself, he never writes a word now. No doubt the corn keeps him fairly busy. Is Mary getting cheap rates out to Alberta. I would advise her to travel CPR from Montreal West if she can, as it is by far the best road. Send some more —- along.