Remembrance Illuminated and Candlelight Vigil in Victoria BC

Tonight I’m sharing photographs and a video of two events held in Victoria, B.C. on the night before Remembrance Day. Both were beautifully done and thank you to those who organized them.

Remembrance Illuminated took place at Christ Church Cathedral and honoured the men and women who have served for Canada in both World Wars, in Korea and on Peacekeeping missions. Eighty images, many of them featuring local service personnel were projected on the south tower of the Cathedral. The event has been running for the past two evenings however tonight there was a special ceremony that included an introduction to the project and a Piper. I apologize for the poor quality of the video but I thought I would post it for those of you who were unable to attend the event in person.

Several blocks away a candlelight vigil was taking place at the cenotaph on the Provincial Legislature lawn. The event has been organized by a volunteer group and Cenotaph sentries will be holding vigil throughout the night. Victoria News posted an article that includes more information on the event. 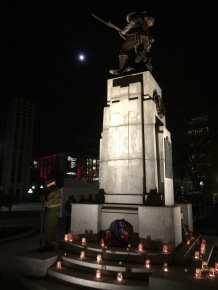