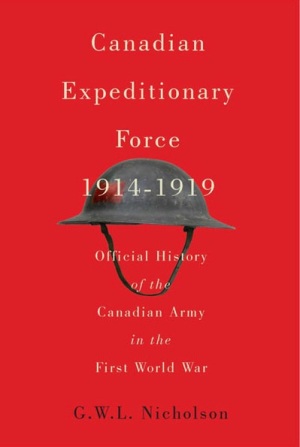 Today I’ve added a First World War Canadian Reference Books page that includes links to books summarizing Canada’s role during the First World War. This page is easily accessible from the “Research” drop-down menu found at the top of every page.

This is the third of three pages listing digitized references relating to Canada in the First World War. The first two were devoted to Regimental Histories and Soldier Memoirs while this new page lists reference books, most being retrospective works published in the years immediately following the war. Many are “official” publications commissioned by the Canadian government, often through the Canadian War Records Office.

I’ve also included a link to a page hosted by National Defence and the Canadian Forces that lists more than twenty Officials Histories in PDF form, including books by C.P. Stacey, A.F. Duguid and G.W.L. Nicholson.

If you’re looking for hardcopies you will find many of these titles in local libraries and used or antiquarian bookshops. Nicholson’s Canadian Expeditionary Force 1914-1919: Official History of the Canadian Army in the First World War was recently reprinted by McGill-Queen’s University Press and is available in softcover form for CAD$44.95 (note: they were offering a 10% discount in early May 2018).