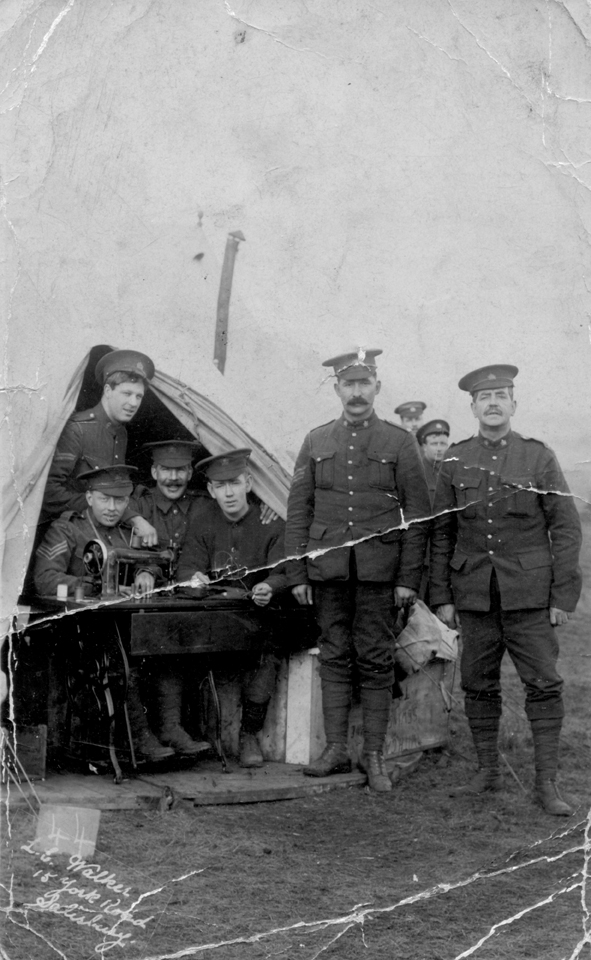 On September 22, 1914 Frederick Charles Rodgman enlisted with the 3rd Battalion (Toronto Regiment) CEF and was assigned Service Number 10089. Several weeks earlier he had arrived at Valcartier Camp as a Private in the 10th Regiment “Royal Grenadiers” but was appointed Sergeant Master Tailor when he joined the 3rd Battalion. In civilian life Rodgman was a tailor, like his father before him, and it was a skill he would use employ on and off during his time in the CEF.

The 3rd Battalion sailed to England aboard the S.S. Tunisian and arrived at Bustard Camp on Salisbury Plain on October 20, 1914. Five days later Frederick was suffering from appendicitis and was operated on two days later by doctors at the 1st Canadian Field Ambulance. He spent 7 weeks recovering in hospital and two weeks on furlough before returning to duties. Frederick sailed to France however he continued to suffer from what was presumed to be postoperative adhesions. Within weeks he was back in the first of what would become several hospitals in France and England.

In May 1915 he was briefly taken on strength by the 23rd Reserve Battalion before being discharged on medical grounds on June 22. This was however not the end of Frederick’s military service. On February 15, 1916 he re-enlisted with the 23rd Reserve battalion at East Sandling and was assigned Service Number 64063. He joined as a Private but in August was appointed A/Cpl and employed in the Tailor’s shop.

On November 16 Frederick began a 20-week Officer’s Training course at No. 1 Officer Cadet Battalion in Newton Ferrers, Devon. On February 28, 1917 Frederick, now a Corporal, was discharged from the CEF on appointment to a commission in the Imperial army.

Special thanks to Nancy Frey for allowing me to share these photos of her grandfather with you. Nancy is actively tracing her family history and would be happy to collaborate with anyone with similar interests. If you’d like to please contact me and I will put you in touch.