Who Goes There? Handley Page Pilots 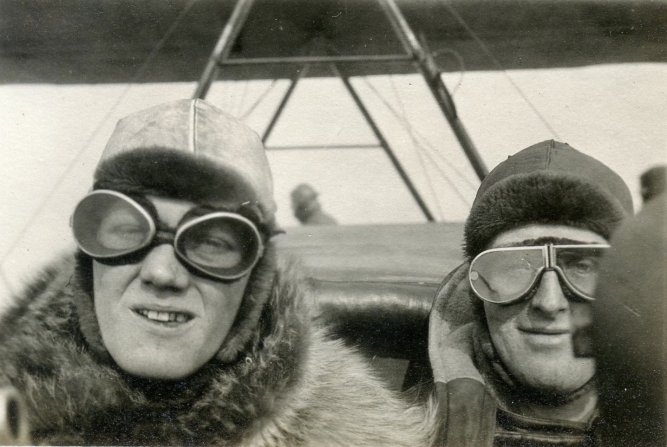 Candid close-ups of First World War combatants are thin on the ground and so finding one taken at 5,000-feet is all the more exciting. This, and the wonderful expressions on the pilot’s faces, make this one of the favourite First World War photographs in my collection. This 1 5/8″ x 2 1/2″ snapshot, taken from the nose gunner position in a Handley Page O/100 bomber, may have been shot using one of these, a Vest Pocket Kodak.

For the moment the names of these pilots are unknown but the photo was part of an album that also contained half a dozen snaps of an early Handley Page Type O prototype. One of these photos show the serial number and although the last digit is partly obscured it is clearly either 1456 or 1458. There’s a great amount of detail on the Handley Page Type O Wikipedia page and from this I surmised that these photos are likely of Handley Page O/100 #1458. The article mentions that 1458 was fitted with “a Scarff ring mounting in the nose”, a feature which I believe is visible in one of the photographs in the gallery below. 1458 was the fourth of four prototypes and the first to be upgraded with 320 hp (240 kW) Eagle engines. Although the article does not specify when it took its maiden flight it was presumably sometime during the summer of 1916. The aeroplane was later modified to test a new nacelle design.

I can’t say conclusively that these pilots flew 1458 but there is a reasonable chance they did. If so further research may yield a list of pilots who flew Type O prototypes and, if I’m really fortunate, I may be able to match these faces to photos in the Royal Aero Club Aviators’ Certificates database. I have visited The Aerodrome website as it includes a list of pilots who flew production Handley Page Type O aircraft but unfortunately it does not list the four prototype aircraft.

If you have any leads on who these pilots may be I would love to hear from you!

A Scarff ring in the nose?

Categories: Photographs, Researching, Who Goes There?