Since posting my original article on the Musselburgh Company of the 7th Battalion Royal Scots I’ve spent some time examining the newspaper photographs in John Duncan’s Newbattle at War photo gallery. Although the gallery doesn’t include all 214 victims of the Gretna Rail Disaster it does feature a large number of Royal Scots, including eleven soldiers identified as being from Musselburgh. I’ve linked each soldier in this list to the newspaper photo featured on Newbattle at War so that you can compare them to the images below: 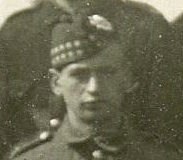 I think the soldier below, pictured in postcard #1 (4th row, 4th from right), is Pte Archibald Hamilton:

I’m much less confident about these three soldiers also identified in postcard #1. Nevertheless I’ve posted them in the hopes that you’ll offer your opinion:

Tim Fox-Godden contacted me to say that he suspects the Lieutenant shown in postcard #1 and postcard #2 could be Lieut. N.C. Riddell. Riddell, who survived the accident, is identified in this photograph of 7th Battalion officers from the Royal Scots Regimental History. I thought this officer might be Lieut. John A. Young who was from Musselburgh and was injured in the accident [UPDATE 19 Sep 2014: This officer has been confirmed to be Lieut. John Alexander Young]. 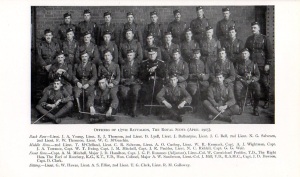 In the course of my research I found an excellent article entitled “The 1/7th Royal Scots and the Quintinshill Rail Disaster” (PDF) on the Commonwealth War Graves Commission website as well as this excellent resource on the Forrestdale Research website. If you have any information that might help identify the soldiers in the three postcards please let me know.