On Aug. 9th, 1917 Pte Valentine Hitchcock was transferred to the 11th Canadian Light Trench Mortar Battery, joining four officers and 50 men recruited from the 53rd, 54th, 74th, 75th, 80th and 102nd Battalions as well as men from 2nd Canadian Divisional Cyclists. The 11th C.L.T.M.B. was equipped with eight 3″ Stokes mortars, a short-range weapon capable of firing 10-lb. shells up to 800 yards and at a rate of 25 per minute. Although a Stokes mortar could be handled by two men additional personnel were required to ferry ammunition from brigade dumps to forward positions.

On the day Valentine joined the 11th C.L.T.M.B. it supported a raid being carried out by the 75th and 102nd Battalions as detailed in Operation Order No. 72 (Page 1 | Page 2). These raids were in preparation for the assault on Hill 70 due to take place on August 15th and followed up by an attack on Lens six days later. The successful capture of Hill 70 and the partial victory at Lens cost the Canadian Corps over 9000 casualties.

Compared to August, September was a period of relative calm. On the first of the month Valentine was awarded a good conduct badge on the 2nd anniversary of his enlistment. After a very brief stint in reserve the Brigade moved into support areas and then back into the front lines on Sept. 20th. The following day Valentine was admitted to the 11th Field Ambulance with a crushed chest, an injury later described in a newspaper article as “being bruised by shell fire”.

Valentine returned to duty on Oct. 7th, first with the 54th Battalion, and then on Nov. 10th to the 11th C.L.T.M.B. He rejoined his unit in the Ypres Salient and on the final day of the long battle to capture the town of Passchendaele, and just two days before the 11th Brigade relieved the 4th in the front lines. Although the objective had been captured their position remained a dangerous one as the threat of a counter-attack was high. Their positions were repeatedly shelled and the men were subjected to attacks from the air, as described in the war diary entry of Nov. 17th:

“The activity of enemy aircraft has been much less during the past two days due to the almost constant patrolling of formations of our fighting planes. During the first four days of the tour, unmolested enemy planes flew at will over our forward positions, often descending to within two or three hundred feet from the ground, and sprinkling our troops with machine gun fire. The material damage done was negligible but from the point of view of morale, the bad effect is considerable.” 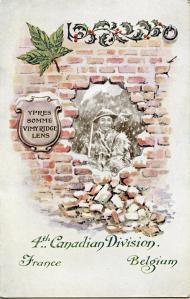 Christmas card to his niece
view inside of card

On Nov. 18th the 11th Brigade was relieved by British 33rd Division and marched out of the Salient and towards Ourton in France. On the 24th Valentine was granted 14 days leave, his first since arriving in France in August of 1916. There’s no record of where he went or who he visited, only confirmation that he rejoined his unit in Ourton on December 15th. Perhaps it was during his leave that he posted this wonderful Christmas card to his one year-old niece, also named Valentine, back home in Victoria, B.C.. The card read “From Uncle Val (France) Wishing you a long & prosperous life”. On Dec. 20th the 11th Brigade relieved the 5th & 6th Brigades and as a result Valentine spent Christmas in the front-line trenches in the Mericourt sector on the edge of Lens.

The 11th Brigade and Valentine’s Trench Mortar Battery remained in this area throughout the first three months of 1918, rotating through the lines in and around Lens. On March 21st the Germans launched their Spring Offensive, code named “Michael”, against the British 3rd and 5th Armies to the south of Lens. The Germans made large gains over the next two weeks however the Canadian sector remained relatively quiet, although not free from enemy shelling. It was on March 25th, during one of these bombardments, that Valentine earned a Military Medal. The citation that accompanied his medal read:

A shell from an enemy Trench Mortar burst in the crater used as a gunpit in which was stored a quantity of stokes ammunition. Pte Hitchcock who was on duty together with Cpl. Wardman and Pte. Colwill immediately went to the spot and found that the Ballistics rings on some of the ammunition were blazing. An explosion of the whole dump was imminent.

Pte. Hitchcock rendered valuable assistance in removing ammunition from the recess, and in extinguishing the fire, which had ignited the sandbag curtain and framework of the recess. He afterwards carried a number of shells which had become hot to the lip of the crater to cool off. His coolness and bravery undoubtedly assisted in preventing the destruction of the whole of the ammunition and the guns, with a possible loss of life.

In Part 6: the final chapter in the life of Valentine Hitchcock