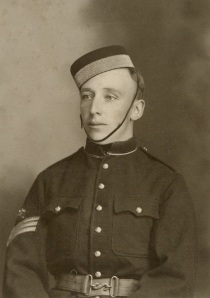 The inspiration behind this research was a four page letter written by a son to his mother several weeks after the Battle of Vimy Ridge. Piercing the letter were a pair of collar badges sent home for safe-keeping. Although he would later win a Military Medal, Private Valentine Hitchcock wasn’t much different than the hundreds of thousands of other ordinary Canadians who served but whose stories have never been told.

In Part 1 of his story we learn of Valentine’s Liverpudlian roots and the tragic start to his new life on Canada’s west coast.

Valentine Stewart Hitchcock was born in Liverpool on October 15, 1874 to Valentine and Ellen Hitchcock. His father, a Liverpudlian, was working in Birmingham where he met and married Ellen Gould in 1872. Within two years the couple had returned to the booming port city of Liverpool and began to raise their family. The Hitchcock household was small by Victorian standards, Valentine had only two siblings, Margaret (b. 1876) and Irene (b. 1881).

Valentine was born into a bookbinding family. Bookbinders assembled folded pages into blocks which were then attached to leather or cloth covers. According to the 1881 census Valentine Sr. was employed as a “Bookbinder Journeyman Foreman”, a title that would suggest he was well on the way to mastering his trade. The state of his career in 1889 is unknown but he must have had good reason to leave his young family in Liverpool that year and sail to Boston, Massachusetts. After a brief stay in Boston he made his way overland to Vancouver, British Columbia where on March 9, 1890 he boarded the Steamer S.S. Islander for the journey to the provincial capital of Victoria.

Valentine’s father soon found work as a bookbinder foreman at R. T. Williams, a publisher and book manufacturer on Broad Street. Later that year Valentine Sr. sent for his family and on October 2 1890 Ellen, young Valentine and his two sisters boarded the Cunard steamer S.S. Catalonia in Liverpool and headed for Boston.

The Hitchcock family arrived in Boston eleven days later but did not make the journey to Victoria until the following spring, arriving on April 14, 1891. What should have been a joyous reunion quickly turned tragic when the elder Valentine, aged only 47, died of complications from a cold the following day!

With his father lying dead in Ross Bay Cemetery 16-year old Valentine now found himself the family breadwinner. Fortunately his father’s former employer took the family under his wing and offered young Valentine a job as a bookbinder. The 1891 census, conducted just one month later, revealed that Valentine’s mother Ellen was employed as a housemaid in R.T. William’s household and that it had become the temporary home to all three Hitchcock children. 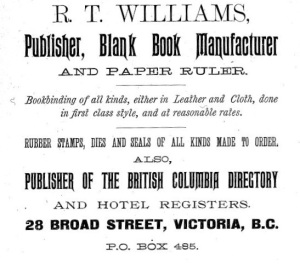 Within a year the Hitchcock family had moved out of the Williams household and into the Williams Building at 28 Broad St, home to William’s publishing business. Valentine’s mother Ellen soon became caretaker of the building while Valentine continued to work for R. T. Williams until 1897 when he and a co-worker, Charles Edward Janes, took over the publishing business from Williams. Janes & Hitchcock was a short-lived venture and by 1898 Valentine found himself employed by the Province Publishing Co. Ltd. at 181 Fort Street. Before long the entire family took up residence at this Fort Street address and within a year the company also employed sisters Margaret and Irene as stenographers. However Valentine had other ambitions and in Part 2 we’ll explore his life as a firefighter with the Victoria Fire Department and how, as a young Corporal with the 5th CGA he rubbed shoulders with a young upstart gunner named Arthur W. Currie.