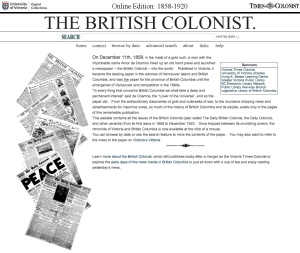 In early November I attended the launch of a new website called A City Goes To War. The event, held at the University of Victoria, included announcements on several other websites that were of interest to researchers and historians. The most exciting for me was the news of a major enhancement to The British Colonist – Online Edition, a digitized and searchable newspaper archive made possible by a generous donation by the Times Colonist newspaper.

I’ve been a regular visitor to this free website since it was launched in 2008. It has proven invaluable in many research projects over the years, both military and otherwise. Version 1.0 of the website included issues from 1858 to 1910, tantalizing close to but not including coverage of the First World War. I often muttered to myself, usually while fumbling with a reel of microfilm at the public library, how wonderful it would be if only I could research these soldiers from the comfort of home. Well now we can!

The information contained in these digitized newspapers will appeal to a wide range of First World War researchers and historians. Victoria is the provincial capital and in the early 20th century it was an outpost of empire. As such the paper covered topics that will be of interest to British Columbians, Canadians and researchers from Britain and the Commonwealth. Not only were a lot of battalions raised in Victoria but a large percentage of recruits, especially in the early stages of the war, were British-born. One soldier who called Victoria home was Ontario-born Arthur William Currie, the school teacher then real estate agent who rose to become the Commander of the Canadian Corps in WW1.

The front-end of the website was developed by the University of Victoria but in this new version the digitized images are hosted on the Internet Archive, an interface that many of you may be familiar with. As is the case with many digitized archives you will encounter some optical character recognition (OCR) errors. Nevertheless if you are determined enough you will likely be rewarded for your effort. I’ve only spent an hour using the new version but so far I’ve found that the front-end search tool works quite well. Invest some time playing with the tool and it will pay dividends. Here are some tips based on my experiences so far:

3. If you prefer you can also browse specific issues of the newspaper, such as the one issued on the day the armistice was signed.

4. Visit and make use of another excellent website: Victoria Newspapers 1858-1936. This newspaper index was manually compiled by Leona Taylor and Dorothy Mindenhall and includes many results missed by OCR. Use their findings to look up specific issues on The British Colonist – Online Edition.

5. Don’t get your hopes up with respect to photographs. The quality of the digitized photos leaves a bit to be desired but having spent many hours trying to print from microfilm I can understand the difficulties. Perhaps somewhere in the Times Colonist vaults are the original photographs of hundreds, if not thousands, of First World War soldiers?

6. Enjoy discovering new facts about your soldier for free and from the comfort of home. In February add new discoveries to your soldier’s story on Lives of the First World War.

A big thank you to the Times Colonist and the University of Victoria for making this available to the entire planet free of charge. Who knows what amazing stories will be unearthed and told over the next four years.