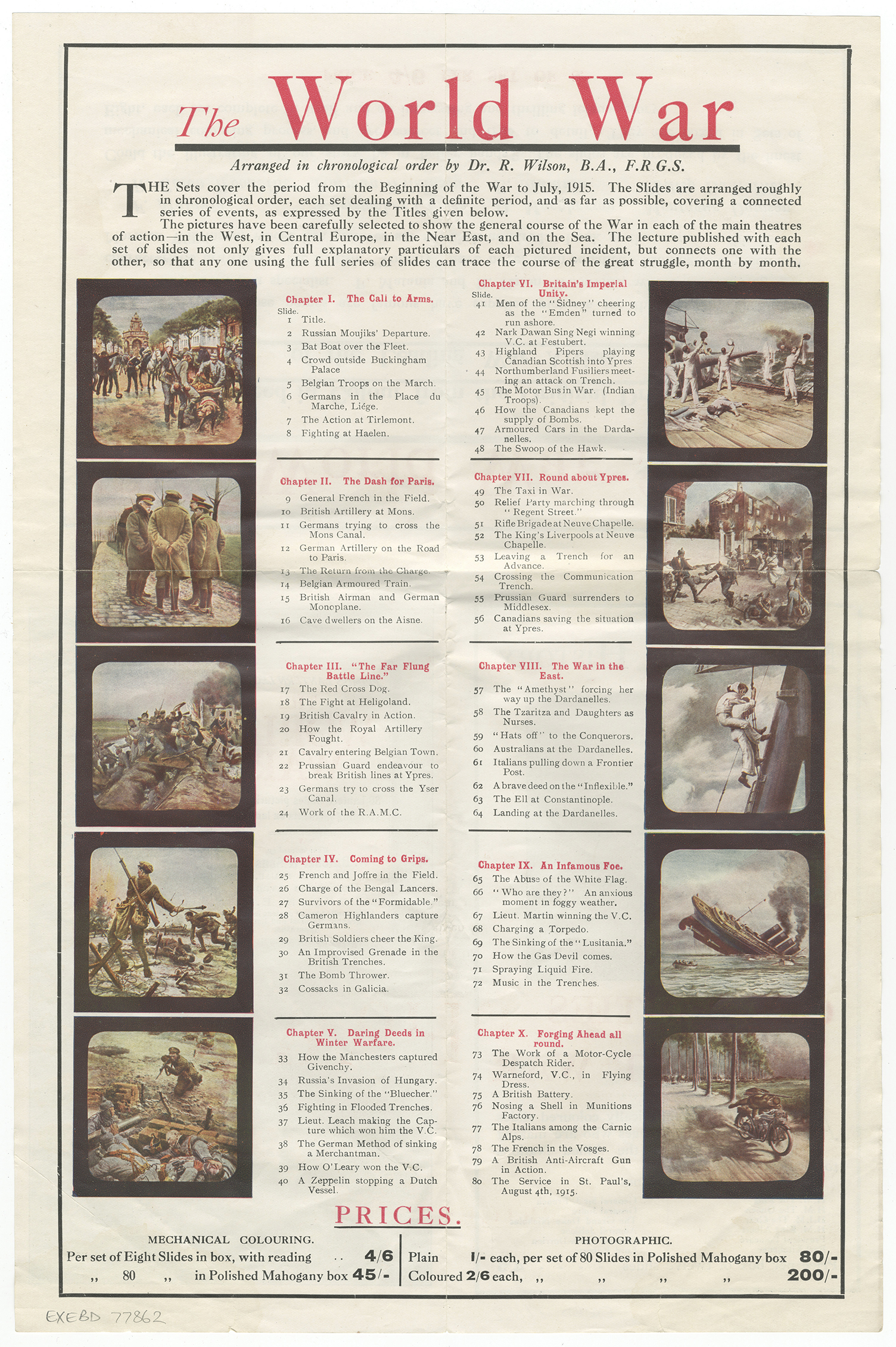 “The World War” Publicity Handbill from the University of Exeter

In 1915 London-based W. Butcher & Sons Ltd produced a set of 80 Lantern Slides called “The World War” as part of their Primus Lantern Lecture series. The slides were divided into ten chapters of 8 coloured slides and accompanying lecture notes. The illustrations were created by some of the period’s top war artists and some featured in magazines such as The Graphic and The Sphere.

I recently purchased 40 of these slides and have uploaded my scans to a World War Lantern Slides set on Flickr. I’ve also included links to PDFs of some of the original lecture notes, by kind permission of the Magic Lantern Society Slide Readings Library and Lucerna Magic Lantern Web Resource. The lecture notes are available for chapter 1, chapter 4, chapter 5, chapter 6, chapter 7 and chapter 8.

The three slides featured above are: #1 – A Call to Arms, #43 – Highland Pipers playing the Canadian Scottish into Ypres and #45 – The Motor Coach in War. The lecture notes for slide 43, jingoistic but typical of the period, are as follows:

Our picture shows a remarkable example of that Empire brotherhood which is formed and strengthened by the facing of a common danger and the daring of death in a common cause. No part of our far-flung Empire responded to the call of arms more nobly than Canada, which sent her men and her money without stint to the help of the Mother Country. Canada, like London and Liverpool, has her Scottish regiments, who preserve the fighting tradition of “Caledonia stern and wild,” and soon proved their mettle in the struggle with the lawless barbarians of Central Europe. After the famous fight at Langemarck, where the Canadians suffered heavily, though not so heavily as their foes, the Canadian Scottish tramped back through Ypres. The regiments in reserve in the town turned out in crowds, cheering themselves hoarse in the warm and unselfish admiration of what their brethren from overseas had done. The pipers of a Highland regiment went out to welcome them and headed them through the streets, playing them into camp to the old familiar tunes which had so often stirred the hearts of thousands in peace time. The scene was one to be remembered by those who saw it for the rest of their lives.