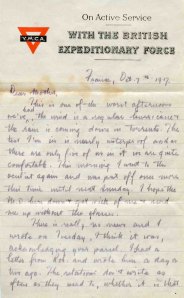 A letter written to his mother while in France. He didn’t return to his Battalion until November 23 so it is likely he was at the 4th Canadian Infantry Base Depot at this time (in his letter of Nov 11, 1917 he suggests his mother should ship parcels to the Depot and “if I have gone they will be forwarded alright”).

This is one of the worst afternoons we’ve had. The wind is a regular hurricane & the rain is coming down in torrents. The tent I’m in is nearly waterproof and as there are only five of us in it we are quite comfortable. This morning I went to the oculint again and was put off once more this time until next Sunday. I hope the M.D. here doesn’t get sick of me & send me up without the glasses.

There is really no news and I wrote on Tuesday, I think it was, acknowledging your parcel. I had a letter from Rob and wrote him a day or two ago. The relations don’t write as often as they used to, whether it is that the novelty of the “Colonial” cousin has worn off or that I answered their letters to promptly I can’t say.

On Wednesday I sang at one of the Scottish Churches Huts here – a concert, and got on fairly well. I am still sticking to “The Admirals Broom”, “They All Love Jack”, “The Trumpeter” & “Because” and one or two more of the old stagers. They always go very well.

This morning I had quite a windfall at one of the places where I sang with a bunch from the Canadian Battery. The Chaplain in charge, not having any supper for us, gave us a twenty franc note and my share, two francs & a sixpenny bit reached me today. An English sixpence is worth seven pence here and all other English money in proportion. Payday tomorrow.

I hope the censor left the picture in the other letter. I had the pleasure of sitting one night in front of the entrance on the right of the picture with a bomb ready in my hand to throw down if there was any sign of life below. There wasn’t. We had gone into the gunpit at night & did not know if there were any Huns inside or not.

Tomorrow & Wednesday night I am singing with the same bunch if I can get off. Tonight I am on road picket and it promises to be a dirty job if the rain keeps up. Yesterday I was chief dish washer in the officers mess, washing dishes from early morn till 8:30pm.

It is a rotten job. Thank goodness the clock has been put back to its normal time. The great event happened today.

Well that is absolutely all I can think of to tell you so may as well shut off.

Love from your own