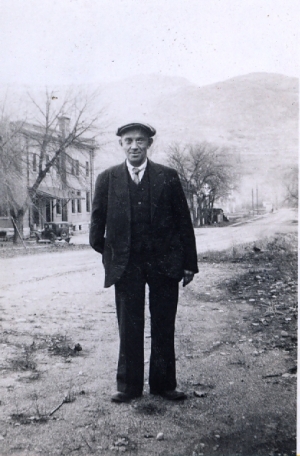 Anthony Baker was a “turner” by trade, fashioning metal parts for use in machinery, a skill that would be in great demand during the world’s first mechanized war. Born in Birmingham, England on April 18, 1882 Anthony emigrated to Canada in March 1905. He lived in Manitoba and Saskatchewan before settling in Drumheller, Alberta where he married Carla Fletcher in 1913.

In 1915 British Labour MP George N Barnes led a mission to Canada in search of skilled workers for British munitions factories. In June and July the mission recruited in Alberta and by mid-August Anthony and 37 other mechanics had disembarked from the S/S Corinthian in London. Accompanying Anthony aboard the ship were his wife and their five-month old son John.

Little is known of Anthony’s time in England with the exception of one extraordinary event which took place while he was working at an armament plant. The story passed down though his family states he was injured during a Zeppelin raid, seriously enough to require the amputation of one of his arms. Details of where and when the raid took place were unknown however a passenger list confirms that Anthony and his family returned to Canada on February 24, 1916.

Newspapers from the period include many articles on Zeppelin raids but not surprisingly they contained little detail of damage done to military targets, including armament plants. Kenneth Poolman’s 1960 book “Zeppelins Over England” made reference to an attack on the Woolwich Arsenal in October 1915 however it was Ian Castle’s excellent book “Zeppelin Onslaught” and his helpful Zeppelin Raids, Gothas and ‘Giants’ website that provided the information I was looking for, including details on every raid on Britain between 1914 and 1918. After reviewing those that took place between August 1915 and February 1916 I was left with one solid lead, the Woolwich Arsenal attack that took place on the night of October 13/14.

On that night five Zeppelins took part in a raid including L.13 commanded by Heinrich Mathy, who shortly before midnight flew over the Arsenal and “dropped one HE and five incendiary bombs, injuring nine men, one of whom later died“¹. Ian’s book “Zeppelin Onslaught” includes a detailed description of the raid and provides a critical clue, that the High Explosive bomb that caused the injuries fell through the roof of the Main Machine Shop.

The names of those injured in the raid is unknown, as is the name of the individual who died, however I strongly believe that Anthony was working in the machine shop that night. A lengthy hospital stay would have followed his amputation and so his return to Canada in mid-February 1916 fits this timeline.

In 1917 Anthony moved his family to Grand Forks, British Columbia where he delivered the mail from 1923 to 1943. Apart from twenty months spent on Vancouver Island Anthony remained in Grand Forks until his death on September 24, 1965.

I would like to thank Ian Castle for his help and Anthony’s granddaughter Tammy Harken for providing her family photos and for allowing me to share Anthony’s story with you.