Digging out on the Home Front 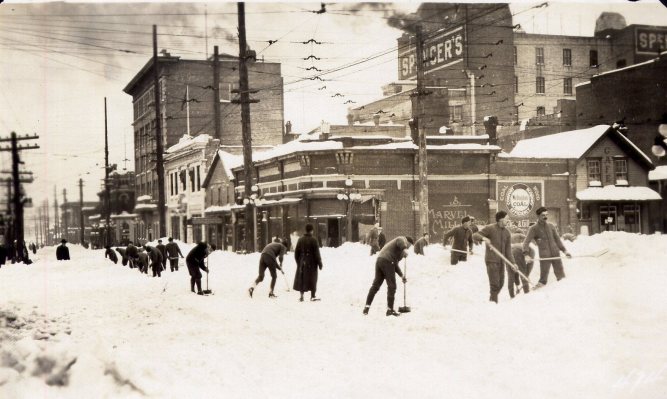 Soldiers clear the streetcar tracks at the corner of Fort and Douglas on Feb. 4, 1916

This week marks the 100th anniversary of a snowstorm that paralyzed Victoria BC in the first week of February 1916. The snow began falling on the 1st of the month and intensified the next day when 53 to 58cm fell, a record that stood until December 1996 when Victoria received 65cm of snow in a single day (a day I remember well).

A century ago we relied on manpower more than machinery and Victoria-based soldiers, busy training to ‘dig in’, were soon asked to help overwhelmed city workers dig out miles of streetcar tracks. In 2012 I mentioned this in part three of my six-part series on Valentine Hitchcock:

Transportation in the city ground to a halt and at Willows Camp the mess hall roof, used by both the 67th and 88th Battalions, collapsed under the weight of snow. Residents began running low on food and fuel to heat their homes and so on Feb. 4th nearly 600 soldiers from the 67th, 88th and 103rd Battalions as well as troops from the 11th Canadian Mounted Rifles assisted the city in clearing its streets. 125 men from the 67th were detailed to work east along Oak Bay Ave from the Oak Bay Junction while another party dug their way out from the Camp towards Richmond Road. The soldiers efforts paid off and by the following day street car service resumed in parts of the city.

This time last year CHEK News featured a story using photographs and film footage provided by the Royal BC Museum & Archives. This rare film footage provides a fascinating look back at soldiers clearing streets, improvised horse-drawn sleighs and early automobiles getting stuck in the snow. Setting aside 3 minutes to view this excellent piece is strongly recommended: