Christmas at the Front – Merry Xmas from Giessen Dec. 1915

A Christmas card sent from Giessen P.O.W. camp in 1915

As a Prisoner of War in the Giessen P.O.W. camp Sergeant Thomas Bramah Diplock was nearly 300 miles behind enemy lines when he posted this Christmas card 100 years ago. It was addressed to “Miss Dove”, his girlfriend and future wife Gwendoline Emily Dove, and marked his second Christmas away from home. Another four Christmases would pass before he would be reunited with Gwen and his family in North Vancouver.

A.B. Diplock outside his business in 1889
Source: City of Vancouver Archives

Thomas was born in Vancouver on December 29, 1892 to local businessman Arthur B Diplock and his wife Theresa E Rischmann. The City of Vancouver Archives includes a wonderful photograph of Arthur outside his importing business in 1889. Arthur eventually opened his own Real Estate firm and by 1912 the family were living in their new home in North Vancouver.

Young Thomas Diplock served for four years with the 6th Regiment Duke of Connaught’s Own Rifles and when war broke out in August 1914 he was quick to volunteer. He joined the 7th Battalion (1st British Columbia), CEF on September 19th and set sail for England aboard the S.S. Ruthenia on October 3rd, one of 32,000 members of the First Canadian Contingent.

In April 1915 the 1st Canadian Division was in the Ypres Salient when at 5pm on April 22 the Germans released chlorine gas, signalling the start of The Battle of Gravenstafel Ridge, the opening phase in the Second Battle of Ypres. The 7th Battalion was stretched out along the road from Wieltje to Gravenstafel and while the battalions of 3rd Brigade bore the brunt of the initial attack the 7th Battalion was in the thick of the second phase, The Battle of St. Julien, which began in the early morning hours of April 24th. In his book “Canadian Expeditionary Force 1914-1919“, Col. G.W.L. Nicholson described the situation as follows:

“Shortly after 11:00am the commanders of the 7th and 15th Battalions, and the second-in-command of the 14th, out of touch with the 3rd Brigade Headquarters, conferred on the St. Julien-Gravenstafel road and decided to evacuate their exposed position and withdraw 300 yards to a new line south of the Gravenstafel Ridge. The right half of the line, consisting of the survivors of the 15th and 13th Battalions, fell back without great loss, but so closely were the Germans pressing the left that two companies of the 7th Battalion were overrun 500 yards north-east of St. Julien, the majority being taken prisoner.”

Sgt. Thomas Diplock was captured that day, one of 1400 Canadians who became prisoners of war during the Second Battle of Ypres. Adjusting to life as a PoW would have been difficult but it must have been all the more so when he learned of his father’s death on May 27th.

My great-grandfather Herbert Clifford, a Lance-Corporal in the 14th Battalion, was taken prisoner while scouting enemy positions on the evening of the April 22. Both he and Thomas spent Christmas 1915 at Giessen but their PoW experience differed considerably over the course of the war. While my great-grandfather was imprisoned in three different camps Thomas would remain at Giessen for nearly three years until he was transferred to an internment camp in neutral Holland. 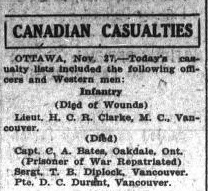 The exchanging of prisoners began as early as March 1915 when Germany and France agreed to repatriate seriously wounded soldiers†. By May 1916 the British had negotiated a similar agreement with Germany that sent injured prisoners to neutral Switzerland¹. This was quickly followed by a second agreement that saw Officers and NCO’s who had been imprisoned for more than 18 months become eligible for internment in Switzerland and Holland². Other ranks, including Lance-Corporals, were not so fortunate as they, unlike Officers and NCO’s, could be made to work by their captors³. The first prisoners to be interned in Holland arrived in December 1917 but Thomas was not transferred until March 23 1918. Like many Canadians he was held at The Hague until he was repatriated on November 18 1918.

Thomas returned to Canada aboard the S.S. Carmania and was demobilized in Vancouver on March 6, 1919. Four months later, on July 22nd, he married Gwen in North Vancouver, where they would begin to raise a family. In 1938 they moved to Edmonton where Thomas joined the Department of Veterans’ Affairs. The couple returned to North Vancouver after he retired. Gwen passed away in 1974, aged 80, outlived by Thomas who died on March 18 1981 at age 88.

† after publishing this article I found a reference to injured British PoWs repatriated on Dec. 7, 1915