In May 1918 George Fisher wrote a letter to the editor of the Signal newspaper in Goderich Ontario regarding the death of his younger brother Percy in March of that year. Ninety-six years later his great nephew Tony Adamson left a comment on my blog when he noticed that I too was researching his great uncle Percy Fisher. Last month Gordon McWhaw, a former member of the Royal Canadian Hussars, also left a comment regarding Percy. Gordon was in possession of the Memorial Cross given to Percy’s mother after the war. I’m very pleased to report that the Memorial Cross will soon be reunited with Percy’s descendants.

Percy Fisher was born in Rathbarry, Ireland on August 23, 1891, the second oldest of 8 children, five of whom served during the First World War. Percy’s father George served in the Coast Guard and the family was likely based in Ireland for some time before returning to England in the early 1900’s and settling in Eastbourne.

Percy emigrated to Canada in 1911 and appeared in the censuses conducted in England and Canada that year. On the night of April 2nd Percy was living with his mother at her home at 20 Sidley Road in Eastbourne and employed as a Footman. On April 13th he boarded a ship in Liverpool bound for St. John’s, New Brunswick and arrived in Canada ten days later. On June 1st, the night of the Canadian census, he was recorded as a farm labourer living in the Ontario town of Goderich.

On March 21, 1918 the German’s launched their last major offensive of the war. At 7pm on the evening of the March 22nd the 1st Canadian Motor Machine Gun Brigade was given orders to stand-to. They were in Verdrel, near Vimy, but were soon on the move to Amiens where they arrived shortly before noon the following day. The Yukon and Eaton Batteries were immediately sent to Roye and then on to Nesle where they were attached to the British 20th (Light) Division. On the morning of the 24th four guns from the Yukon Battery were sent with Lieutenants Vosburgh and Black to protect an artillery brigade northwest of Nesle and it was here that Percy died. His Canadian War Graves Register (Circumstances of Casualty) report states:

“Information is available that he was hit in the body by an enemy machine gun bullet, during military operations in the vicinity of Nesle and Breuil, and was last seen in a dying condition.”

My research has led to a report by Lieutenant Black that may in fact be the “information” referred to above. Black states that on the morning of the 25th they encountered advancing Germans and opened fire “with great effect”. He then wrote of the ensuing fire fight:

“Sgt. Blaikie was killed and one of the gun crew shot through the stomach and his gun put out of action. I went to the Sergeant and found he was dead. The other man was dying and told me not to bother with him, as he would not last many minutes. I saw nothing could be done for him, and the situation being critical I left to join the others.”

Two months later, on May 15, 1918, Percy’s older brother George wrote his letter to the editor of the Signal in Goderich. A brief notification of his death appeared in the June 6th edition of the Huron Signal however two weeks later, on June 20th, the paper printed a detailed story that was taken almost word for word from George’s letter:

‘Some particulars have been received of the death of Pte. Percy Fisher, formerly of Goderich who was so seriously wounded on March 24th that he died on the battlefield.  This was in the early days of the great German offensive in France.  Pte. Fisher while residing in Goderich was employed by the Western Canada Flour Mills Co. and was a member of Huron Lodge of Oddfellows.  From here he went to work in the Maple Leaf flour mill at Port Colborne, and he gave up his position there to enlist in a machine-gun unit at Hamilton in the fall of 1915. Going overseas in the early part of 1916, he landed in France during the summer of that year and fought with two well-known machine gun batteries.  He was one of five brothers serving in the war, three in the army and two in the navy. George, the oldest brother, also lived in Goderich for some time, went overseas with the 161st Battalion and is now in France. Percy was the second son and was twenty six years of age.  Their father was the late Chief Officer [sic] G. Fisher of the British navy; the mother is living at Eastbourne, Sussex, England.’

At the time George Fisher wrote his letter he was serving with the 47th Battalion. He survived the war but another brother, Ernest Frederick Fisher, who served in the 12th Battalion, The Royal Sussex Regiment died at the Somme on October 21, 1916.

Percy Fisher was first reported “wounded and missing” and then “presumed dead”. In 1924 his body was identified and re-buried in the Pargny British Cemetery. He is commemorated on both the Veterans Affairs Canada Canadian Virtual War Memorial and the Eastbourne War Memorial.

Acknowledgments: I would like to thank Tony Adamson and his family, Gordon McWhaw for providing photos of the Memorial Cross, David Yates for researching and sharing the Huron Signal articles and Dwayne Evans from the Town of Goderich for his assistance.

The Memorial Cross given to Percy Fisher’s Mother 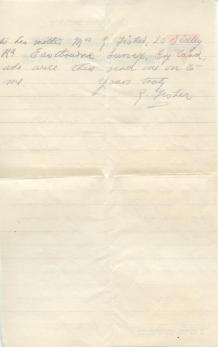 George Fisher letter, back of cover