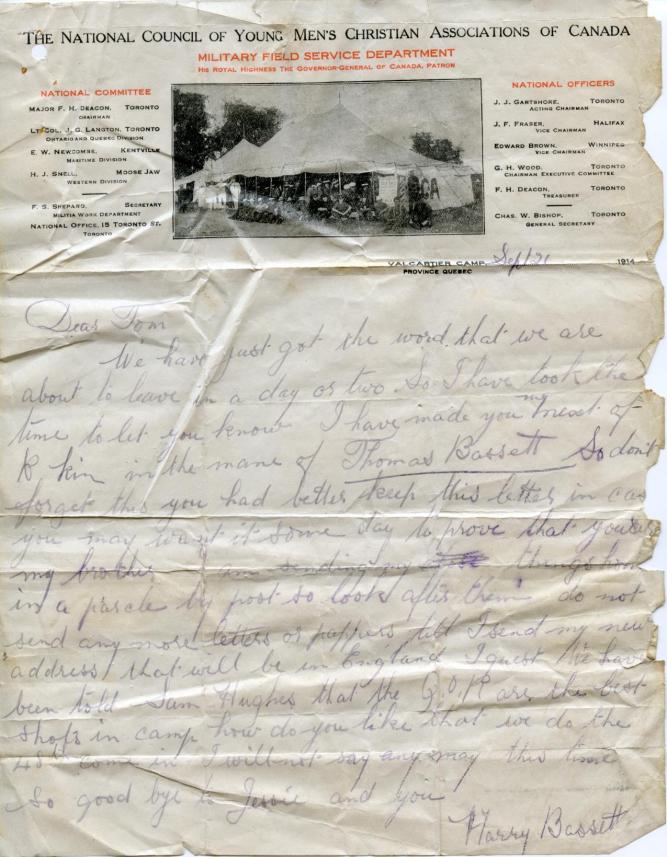 One of the soldiers I’m actively researching is Private Harry Bassett, a 30-year old Birmingham born machinist who served in the South Staffordshire Regiment before emigrating to Canada. In 1901-02 he was a Private in the 3rd Battalion when the South Staffordshire Regiment was in South Africa. When Harry emigrated to Canada he joined the Queen’s Own Rifles, a infantry militia regiment based in Toronto.

On September 21, 1914 Harry wrote to his brother Thomas in Toronto from Valcartier camp, the day before he signed his attestation papers, to inform him that he was making him his “next of kin”. Harry was assigned service number 9298 and became a member of the 3rd Battalion (Toronto Regiment) CEF, a battalion largely made up of recruits from the Queen’s Own Rifles. In the letter Harry boasts that Sam Hughes, the Canadian Minister of Militia and Defence, felt the Queen’s Own Rifles were the best shot in camp, a fact which the 48th Highlanders, another Toronto-based Militia unit may have taken issue with.

This is the first in a series of correspondence related to Harry that I will publish 100 years to the day. Harry advised his brother to keep this letter in case some day he needed it. Sadly Thomas would fulfil his role as ‘next of kin’ in less than one years’ time.