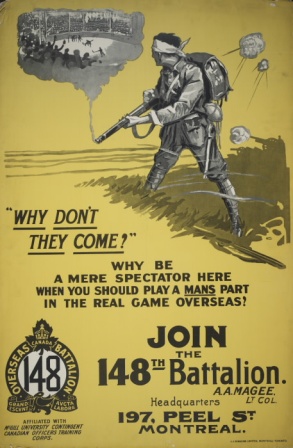 We’ll never know exactly what the Liddell brothers were thinking when they made their way down Peel Street towards the 148th Battalion recruiting office on January 31, 1916. The rain and sleet that fell that day were likely not top of mind when they lined up in front of the recruiting Sergeant. When the paperwork and medical exams were complete 19-year old Matt had became Pte Liddell #841306 and 18-year old James Pte Liddell #840307.

The 148th trained in Canada before embarking for Britain aboard the RMS Laconia on September 27th. The battalion arrived in Liverpool on October 6th but was to remain together for a very short time as the 148th was destined to be broken up. The Liddell brothers were among the very first to be transferred to another unit when on November 29th they joined the 14th Battalion, The Royal Montreal Regiment, in the field. The 14th’s War Diary for that day was very brief and to the point:  “Fine day. Desultory trench-mortar activity on part of enemy. Burying parties.”

In December the 14th Battalion rotated through the lines in the Carency sector, northeast of Arras and then spent Christmas in reserve. For the first half of January they were in training before returning to the front lines to relieve the 18th Battalion, who only hours earlier had helped the 20th and 21st Battalions conduct a very successful trench raid in the Calonne sector. The 14th remained in this sector until early March and it was here that the Liddell brothers would be separated for the remainder of the war.

On February 11th, just as the 14th Battalion was about to relieve the 13th Battalion in the trenches, Matt reported sick with trench foot. Although he had no way of knowing it at the time Matt would not return to the 14th while younger brother James would finish the war with this battalion. What’s truly remarkable is that James would go on to survive some of the greatest battles of the war, Vimy, Passchendaele, Amiens and a series of attacks in 1918 known as Canada’s Hundred Days, without injury. In fact his service record, with the exception of two references to leave, shows nothing until he reports sick with influenza in February 1919. James returned to England where he quickly recoverd and by mid-May he was back in Montreal and demobilized. In stark contrast to James’ experience is older brother Matt’s.

Matt passed through a series of field hospitals before returning to England aboard the hospital ship “Stad Antwerpen”. On arrival at the Graylingwell War Hospital in Chichester a doctor’s scribbled note described his condition as “Big toes both feet swollen and numb. Pain on walking. Blisters came up later”. Trench foot was a serious problem and not only to your health. Soldiers were expected to take care of their feet and Officers who didn’t ensure their men did so were subject to censure and in turn would often punish their men by cancelling leave. There’s no record of Matt or his comrades being punished however it is interesting to note that when he recovered he joined the 13th and not 14th Battalion.

On October 10th he reported ill once more, complaining of headaches and of feeling “stunned”. A series of doctors examined him and described it as “NYDN” (Not Yet Diagnosed Neurosis) / “NAD” (No Appreciable Disease), acronyms sometimes used when describing shell shock. Matt suffered from both Rhinitis and a deviated septum and so there was some speculation this could be the cause of his headaches. When he was finally discharged to duty on Dec. 5th it was to the 1st Canadian Engineers where he was employed as a stonemason.

In mid-April 1918 Matt was transferred to the 1st Battalion Canadian Machine Gun Corps, dividing his time between the field and headquarters, where for a brief period in late June he was a batman. On August 8th Matt was wounded when, according to a doctor’s note, he “was hit on the helmet by piece of shell and knocked over. A piece penetrated the skin and tissue of left side neck and arm”. He soon found himself back in hospital in England where he recovered for two months before being discharged to the 3rd Canadian Convalescent Depot on October 25th. The Armistice was signed two weeks later but the war was not yet over for Matt.

On January 4th, 1919 Matt Liddell went Absence Without Leave. He was apprehended on February 25th, tried by District Court Martial and sentenced to 60 days confinement at the Wandsworth Detention Barracks. Matt’s imprisonment was interrupted by yet another visit to the hospital in early May, this time for a case of Influenza. By early June Matt was released and granted leave which he overstayed by three days. He was brought before the authorities for the second time in three months and escaped with a stern talking to and three days less pay. A month later Matt  sailed back to Montreal where he was he was demobilized on July 11th, 1919.

Matt’s court martial records are on order. Could there be another twist in the tale of The Mysterious Uncle Matt?