Who Goes There? No. 2 Coy Mountain Battery RGA

Underneath one of these jaunty caps can be found Gunner Clark of the No. 2 Company Mountain Battery Royal Garrison Artillery. While some Mountain Batteries served in India some spent time in France before moving on to either Salonika and/or Egypt. According to The Long, Long Trail No. 2 Coy was sent to France with III Corps in December 1914 and attached to the 4th Division in March 1915. They moved to Salonika in 1916 and then to India in 1919.

This set of three postcards may have been photographed in England prior to shipping out to France in December 1914. They are wonderful images, particularly the one showing the boys enjoying a pint with friends and family. 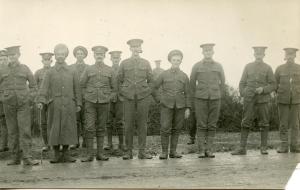 Categories: Photographs, Who Goes There?